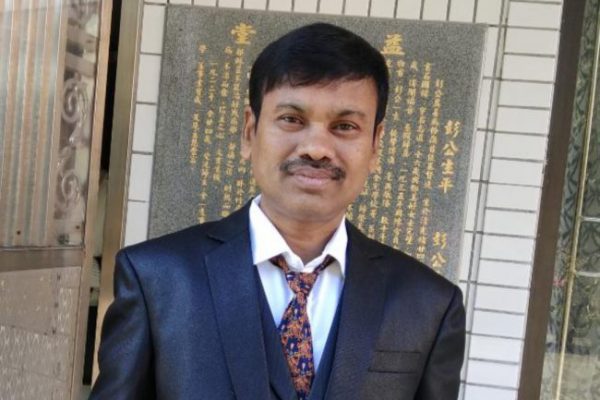 Dr. Paul Viswanadham was born in a family of temple trustees (his father has built the temple in their village), performing all kinds of religious rituals.

His mother passed away when he was 7 years of age and he felt that life was so dull, dim, dark, without hope, and always miserable. He started searching God in all places and in all religious books. When he was 15 years of age, he read all religious books including Hindu, Muslim, and Buddhist scriptures to find God. People started respecting him as he became well versed in Hindu scriptures.

When he was doing his Master’s degree, God fulfilled his quest for a deep and saving relationship with God, by revealing to him, the love/grace of God, and the work of Christ on the cross.

While doing his doctorate (Ph.D. program in the Department of Political Science at the University of Hyderabad) God called him for His ministry. (PREMSWAROOP Ministries, meaning ‘God is Love’ based on 1 John 4:8). He has been pastoring a church in Hyderabad and reached hundreds of villages with the gospel. He is also privileged to be part of Telugu Bible translation.

Here is the full testimony in his own words:

Here I am sending a nutshell of my testimony. Attempted to write a book entitled “From Temple to Truth”

I was born and brought up in a staunch Hindu family in the southern part of India. We as a family used to worship idols, nature including snakes, animals, stones, and other things and perform all kinds of rituals according to Hindu scriptures. In my village, ours is an influential family because my father built a nice Hindu temple for our village people (Durga Temple). Not only people of my villages other villagers also worship the idol every even till today. My family is only trustees to that temple, as it was built in one-acre land though it was small in structure. I used to participate while they sacrifice sheep, goats, chickens and they offer blood to the idol in the festival times. My village people started worshipping my mother as a goddess while she was alive and even after her death. While I was a young boy my mother passed away. (maybe I was 7 years of age by that time) My Father’s brother, who is my uncle, took care of me until he passed away. Life was so dull, dim, dark, no hope, and always miserable. My heart always craved for love as I had lost my mother. I have had enough sympathy from people as a half orphan but no real love from anywhere.

In that situation, I started searching God in all places and in all religious books. When I was 15 years of age I read all religious books including Hindu, Muslim, and Buddhist scriptures to find God. But I never find God or peace or joy in my life. Those religious texts are very interesting like detective novels but I never feel any good out of them. People started respecting me because I am well versed in Hindu scriptures.

Interestingly, despite all these difficulties I never neglected my studies. After completion of my Bachelor’s, I registered for my Master’s Degree in the Department of Political Science. While I was in the University someone, who is from the same hostel shared about the love of Christ and the need for salvation. Then I realized I was a sinner though I was the son of a temple trustee and I need salvation to escape from eternal hell. I pretended to be a good man but in the light of the gospel, I have seen the gulf and bitterness and unforgiveness in my life. I cried out for my sins and I accepted Lord Jesus Christ as my personal savior. I had an assurance of my salvation, my heart filled with joy and tremendous peace which I never felt in life before I met Christ.

After that, I went to Hyderabad city for my further studies. I did my Master of Philosophy and then enrolled for a Ph.D. program in the same department of Political Science at the University of Hyderabad one of the prestigious universities in India. While I was doing my doctorate, God called me for HIS ministry to reach the unreached people with the gospel of Jesus Christ. I did not disobey this heavenly calling for the ministry. I started my ministry in the year 1999 by registering PREMSWAROOP MINISTRIES (meaning, ‘God is Love’ based on 1 John 4:8). I have been serving the Lord all through these years faithfully. I have planted a church in Hyderabad and visited hundreds of villages with the gospel. I have seen healings, miracles, signs, and wonders through this ministry.

In the year 2018, I was diagnosed with jaundice. It was traced as obstructive jaundice which needed to be done for major surgery. They found a small lump in the middle of the pancreas which suspected cancer near to the liver and colon. They said I should be in the hospital for 10 days after surgery. The surgery went almost 9 hours and they kept me in ICU for almost 43 days because my body was not responding to medicines and to the doctors. They said that there is only a 40% chance of survival. Mine is a rare case in their medical service and in the history of their hospital.

By God’s grace, I was out of the hospital after two months. Literally I was in the hospital for two months. Now, by His pure grace again I am serving in His mission field. I have seen many people moved and encouraged through my testimony. The greatest thing in my life and testimony was that I have visited heaven, seen angels, and our Jesus Christ face to face. He allowed me to go back to this world. I am serving this resurrected Lord who gave my life back. I am living a miracle. Doctors wondered to see me alive.

That is the power of Lord Jesus Christ.